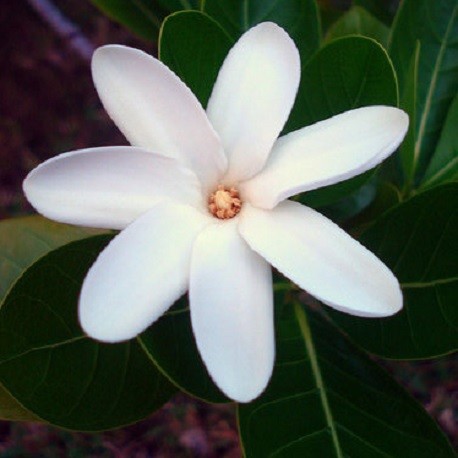 Tahitian gardenia, Tiare also called Gardenia tahitensis is a plant of the family Rubiaceae.
It is a small shrub with white flowers found in much of the Pacific to Vanuatu.
Tiare flower is the national emblem of Tahiti in French Polynesia.
Its flowers are very fragrant.
Fruit is an oval ball the size of a walnut with a multitude of small seeds that resemble those of lulo.

Tahitian gardenia flower is used to make Tahitian Monoi Tiare, A perfume of oil made by flowers infused in coconut oil.
Gardenia tahitensis relieves headaches as well as mexican mint, earache, insect bites, rashes, heal certain wounds.
Tiare is not very hardy and should be grown indoors or under glass.

Sowing of tiare seeds:
Soak Tahitian gardenia seeds in hot water for 6 to 12 hours, then sow the seeds in a box of peat previously moistened.
Cover tiare seeds under 2 millimeters of substrate and then water well with a sprayer.
Finally, put the tiare culture in a mini-greenhouse type place at a temperature of 35 ° C.
Germination of Gardenia tahitensis seeds can take 4 to 6 weeks.

Seeds of exotic and tropical plants to grow in greenhouse or in the tropics.