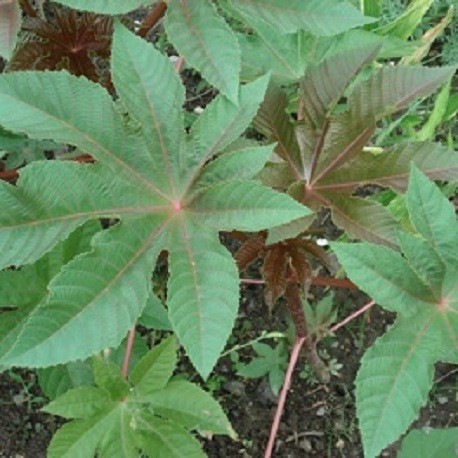 Castor bean or Ricinus communis is a tropical plant of the family Euphorbiaceae.
Its foliage is green or purple palm-shaped.
Fruits of castor bean are bright red, its flowers are also red.
Castor bean seed is particularly beautiful, it is light brown, streaked with dark brown, a true marvel.

For a long time, castor bean was considered a magical plant associated with black magic with yew and enchanter nightshade.
According to legend, castor bean seeds are adorned with many magical qualities.
Castor bean oil would, for example, after an incantation, push the hair back onto the skull.
The entire plant appears toxic due to the presence of ricin.

Sowing of castor bean seeds:
Start by soaking your Ricinus communis seeds 24 hours in warm water, the seeds tend to float, no worry to have for this variety.
Then plant your Castor bean seeds in moist peat pots under 1 cm deep.
Finally, sprinkle your crop and place your pots in a greenhouse at a temperature of 35 to 40 ° C.
The sprouting of seeds how to between 3 and 5 weeks.

Do not consume.
Very beautiful ethnobotanical and shamanic plant to cultivate only as an ornamental plant.