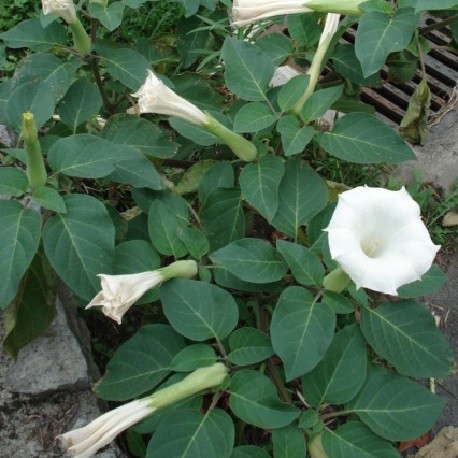 Thornapple or Datura metel is an annual plant.
it is part of the Solanaceae family such as black nightshade or henbane.
It is probably native to northern India, and is now found throughout Southeast Asia.
Its flowers are shaped like big white trumpets.
The leaves have a strong odor but totally different from the Jimson weed.
All parts of the plant are highly toxic.

Datura metel is a plant of great importance in ethnic medicine.
To create an even more exhilarating drink, in Asia the thorn apple leaves are added to the wine.
In South Asia, Datura metel flowers are wrapped in a cigarette.
Datura metel is now mainly used as an ornamental plant.

Sowing of thorn apple seeds:
Start by laminating your seeds naturally in autumn or artificially for 15 days in the refrigerator.
Then sow Datura metel seeds in a box of fine potting soil, cover the seeds of devil grass under 2 millimeters of potting soil and then water with a sprayer.
Finally, leave the culture of thornapple in a warm place as in a greenhouse.
The temperature should not be lower than 27 ° C.

Also exists as a live plant to cultivate.
Ethnobotanical plant seeds to be grown only as an ornamental plant.
Do not consume, poisonous plant.