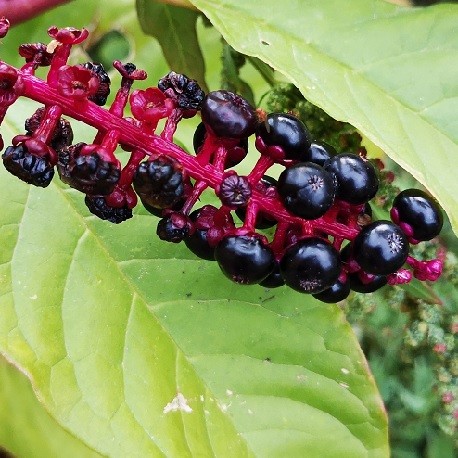 Pokeberry, pokeweed also called Phytolacca is a tropical perennial plant of the Phytolaccaceae family.
It is an ethnobotanical and medicinal ancestral plant used in South America and Asia.
This plant grows in the Himalayan regions between 2000 and 3000 meters in height and in the Andes Cordillera.

Pokeweed root was prepared for its soothing virtues.
In China, they use Pokeberry root as a replacement for Ginseng and Mandrake.

Pokeweed is a plant widely used by shamans.
In Nepal, it consumes the plant as a vegetable, but also against infections related to food.
In traditional medicine, the plant is used to fight back pain as well as bryony, but also to treat skin diseases such as Sarsaparilla or Plantain.

Pokeberry leaves are also used in Colombia to fish, as are fishberry, and they use it as a poison to stun fish.
Root contains saponin just like soapwort or soapberry used as vegetable soap.

Sowing pokeweed seeds:
Stratify pokeberry seeds in the refrigerator or directly outdoors in winter for a period of 2 weeks.
Then sow the seeds of Pokeweed in a pot of fine potting soil and cover them with one to two centimeters of fine potting soil.
Finally, water with a hand sprayer and leave your plantation in a place where Temperature is close to 20 ° C.

Do not consume without medical advice.
Collectible Asian plant seeds only.