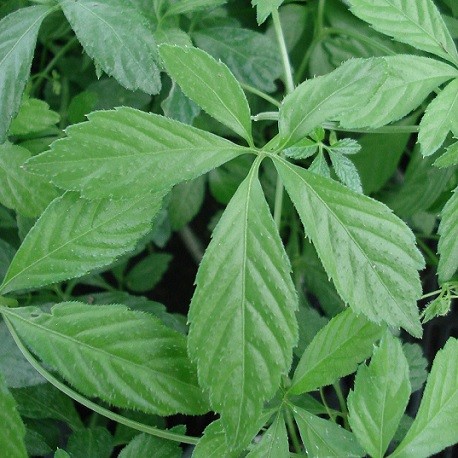 Miracle grass, tea of immortality called also Jiaogulan is a perennial of the family Cucurbitaceae.
It is a fast-growing creeping plant known for a very long time in Asia.
Its flowers are very small white.
Jiaogulan fruits are small green balls then black at maturity.
Miracle grass resists very well to the cold, it remains dormant during the winter and leaves again in the spring.

Gynostemma pentaphyllum is used in traditional Chinese medicine and as a sweetener in Japan such as aztec sugar or Sweetleaf.
It is said that those who drink Jiaogulan regularly infused have an above-average life expectancy.
Substances similar to ginseng are also found in jiaogulan.
This is why it is also called tea of immortality.
By its slightly sweet taste, the Japanese made a sweet tea called Amachazuru.

Jiaogulan has many medicinal properties, it rejuvenates cells, it is a powerful antioxidant just like wolfberry or dragon fruit, it is a cardiac tonic and effectively fight against excess cholesterol.
In Japan, Jiaogulan is consumed in the same way as ginseng (Panax quiquefolius) it would have the same properties but apparently much more effective.
Fresh or dried leaves are used as an infusion or added to tea.
Eating some plant leaves of immortality gives a feeling of strength.

Cultivation and sowing Jiaogulan seeds:
Begin by stratifying the seeds of Gynostemma pentaphyllum, either naturally leaving them outside in the winter, or artificially by leaving them 2-3 weeks in the refrigerator.
Next, prepare a box of fine potting soil, sow the seeds and then cover the seeds with one or two millimeters of fine potting soil.
Water with a sprayer then leave your seed box in a place at a temperature close to 25 ° C.
Germination of Miracle grass seeds takes about 2 to 4 weeks.

Do not consume without medical advice.

Also exists as a live plant for your garden.
Asian plant seeds to grow in pots, flower pots or directly in the ground.