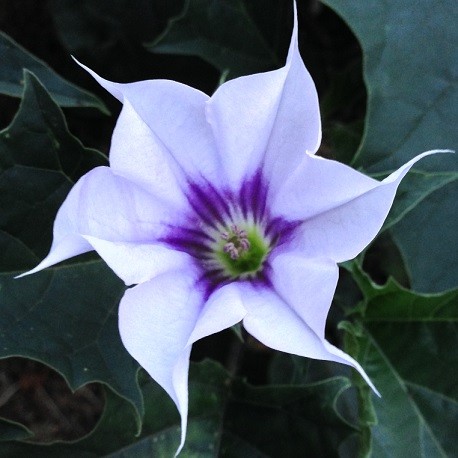 Notify me when available

Datura Tatula called also devils trumpet is perenial plant of the Solanaceae family.
This Datura flowers have a blue heart and magnificent white.

This variety of Datura has beautiful white flowers with a purplish heart.
Datura tatula seeds are small, very hard and black in color.
The leaves have a strong odor close to that of Datura stramonium.

Datura tatula grows on arid soil with little organic matter.
It grows in full sun but tolerates partial shade exposure.
It is generally 1.20 m high by 80 cm wide.
It is a very beautiful shamanic and ethnobotanic plant.

This Datura was discovered in Mexico City, the seeds were used during divinatory rituals.
In North America, the leaves of the Datura tatula are used as a relaxant (as well as wild opium lettuce, wild dagga or ginger grass).
In Germany, Russia and China, seeds of devils trumpet are mixed with beer, which causes an increase in the effects of alcohol.
In Europe, sorcerers and witches, burned the seeds of Datura tatula to chase ghosts and evil spirits.

Sowing of seeds of devils trumpet:
Start by laminating your seeds of Datura tatula 3 weeks in the refrigerator.
Then sow your seeds in a small box of fine and well draining soil, cover them on 3 to 4 mm of soil then water to the sprayer.
Place your Datura tatula box in a greenhouse at a temperature of 25-30 ° C.
Germination of devils trumpet takes place after 3 to 5 weeks, sometimes longer.