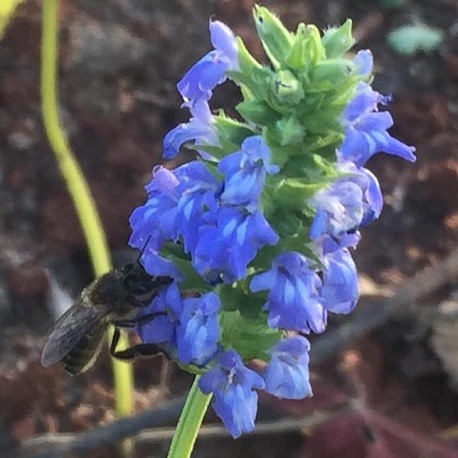 Salvia hispanica or chia, is a species of flowering plant in the mint family, Lamiaceae. Its an annual herb growing to 1 m.
This sage is native to central and southern Mexico and Guatemala.
Chia seeds are small the size of the scarlet sage.

Salvia hispanica was grown for its pre-Columbian food grains by Native Americans, and it also grew quinoa and maize.

Chia sage seeds, which were a staple of the diet of many ancient peoples of Mexico, were also used for medicinal purposes and as offerings to the Aztec gods.
Nowadays, this sage is recommended for physical disorders, such as stomach upset or to reduce heavy perspiration.

Salvia hispanica seeds were also pressed to produce an oil used as a base for body paints and used to paint religious statues and paintings.
Culture has then almost completely disappeared to survive only in the wild.
Chia seeds are also used as food for goldfinches in captivity.

Sowing seeds of Salvia hispanica:
Sow your seeds in a tray of fine potting soil.
Cover the seeds with a few millimeters of soil and then spray with a sprayer.
Then place the tray in a very hot and humid place, type greenhouse.
Germination of chia sage seeds usually takes place after 3 to 4 weeks.

Do not consume without medical advice.
Ethnic plant to collect as an ethnobotanical plant.