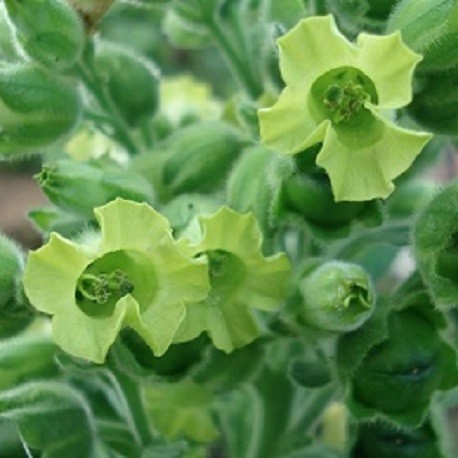 Hopi, Nicotiana rustica, sacred tobacco or mapacho tobacco, known in South America as Mapacho and in Vietnam as Thuoc Lao, is a plant in the Solanaceae family.
Tobacco Mapacho grow in the rainforest it contains up to nine times more nicotine than common North American varieties such as Nicotiana tabacum.
It is a very potent variety of tobacco.
The mapacho tobacco seeds are brown, small, the size of savory or opium poppy.

Mapacho tobacco was cultivated during the pre-Columbian period in Mexico and Venezuela.
The Aztecs dried the tobacco leaves, crushed them and mixed them with Mexican tarragon.
They used it during religious rituals.
This tobacco allowed shamans to develop multiple senses.

Nicotiana rustica were also dried and then consumed for its exhilarating virtues.
Some shamans also chewed leaves like betel palm or calamus.

In traditional medicine, mapacho rustic tobacco was used to combat the problems of asthma, inflammation, toothache, headache and snake venom.
The Warao tribe of Venezuela used the Mapacho sheets as a blunt in shamanic rituals.

Sowing of mapacho tobacco seeds:
Sprinkle your sacred tobacco seeds over the substrate without covering them, spray water over them and leave them in a warm, shadowy place.
Hopi seeds usually germinate in 1 week.
As soon as the tobacco seedlings are 3 to 5 cm long, place them in the garden or in a pot 15 to 20 cm in diameter.
Place your plants full sun if it is in the ground or partial shade if it is potted.
Water regularly in summer.

Do not consume.
To be collected only as a shamanic plant.

Also available as a plant to be replanted.