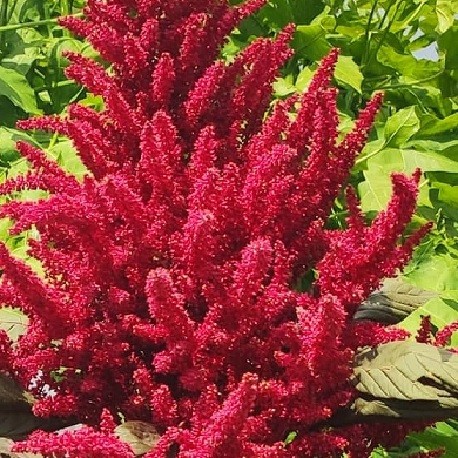 Amaranthus hypochondriacus or amaranth is an ornamental plant commonly known as Prince-of-Wales feather or prince's feather.
Amaranth is originally endemic to Mexico.

Young leaves of amaranth cooked as a spinach.
Rich in vitamins and minerals, they have a mild flavour.
Seeds of Amaranthus hypochondriacus raw or cooked.
They can be used as a cereal substitute same for chia sage or red quinoa.
This plant can also be popped in much the same way as popcorn.
Seeds of amaranth can be soaked for 12 hours in warm water and then allowed to sprout for about 11 days.
They can then be added to salads with spinach strawberry. It's very small but the seed is easy to harvest and very nutritious.

The whole Amaranthus hypochondriacus plant contains tannin and is astringent.
It is used internally in the treatment of diarrhoea and excessive menstruation.
Amaranth can be used as a gargle to soothe inflammation of the pharynx and to hasten the healing of ulcerated mouths, whilst it can also be applied externally to treat vaginal discharges, nosebleeds and wounds.
The plant can be used fresh or it can also be harvested when coming into flower and dried for later use.

Sowing of Amaranth seeds:
Sow your seeds in a crate of potting soil, cover under 1 to 2 mm of fine soil, then spray warm water.
Then place your seed box in a greenhouse or mini-greenhouse at 20 or 25 ° c.
Germination of Amaranth seeds begins about two to three weeks later.