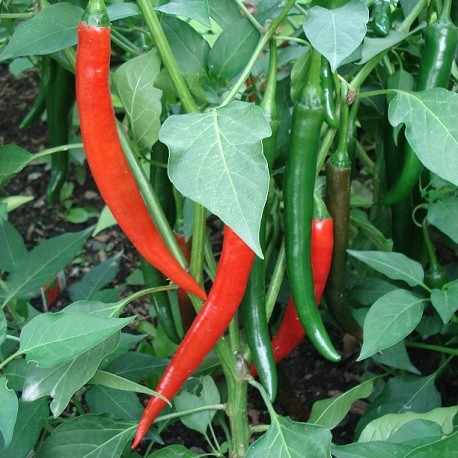 Cayenne pepper also known as the Guinea spice, cow-horn pepper, aleva, bird pepper, or, especially in its powdered form, red pepper is a hot chili pepper used to flavour dishes.
Cayenne pepper is red colored when ripened to maturity, but also eaten while still green.
Named for the city of Cayenne in French Guiana.
The Capsicum annuum genus is in the nightshade family Solanaceae.

The Aztecs were the first users of the Cayenne pepper, they prepared it with cocoa to make a drink supposed to give courage.
Christopher Columbus brought him back from the new world and his use spread throughout the world.

In the kitchen, cayenne chili is renowned for its spicy and burning taste.

In medicine, this chili is recommended for sore throat (as well as mallow, lemon monard or thyme).
Take a pinch of cayenne pepper powder, honey and 25 ml of lemon diluted in hot water.
Cayenne pepper just like Sichuan japanese pepper is also recommended for blood circulation problems.

Sowing Cayenne Pepper seeds:
Sow your seeds in pots by batch of 5 or 6 well spaced under 3 mm of potting soil.
Use a well-rich substrate and aerate.
Then spray water and place your pots in the heat.
Finally, once the Cayenne pepper seedlings are 5 cm tall, place them in the garden in a sunny location.