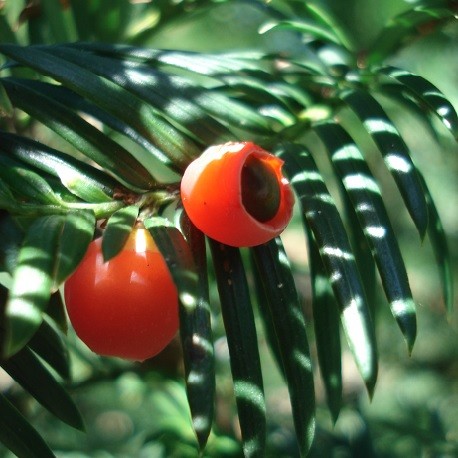 Taxus baccata or common yew is a conifer native to western, central and southern Europe, northwest Africa, northern Iran and southwest Asia.
It is the tree originally known as yew, though with other related trees becoming known, it may be now known as the English yew, or European yew.

Most parts of common yew are toxic, except the bright red aril surrounding the seed, enabling ingestion and dispersal by birds.
The major toxin is the alkaloid taxane. The foliage remains toxic even when wilted or dried.

Horses have the lowest tolerance, with a lethal dose of 200–400 mg/kg body weight, but cattle, pigs, and other livestock are only slightly less vulnerable. Symptoms include staggering gait, muscle tremors, convulsions, collapse, difficulty breathing, coldness and eventually heart failure.

Fatal poisoning in humans is very rare, only occurring after eating a lot of yew foliage. The lethal dose is reported to be between 50 and 100 grams.
The wood is also poisonous. Some bow makers are reputed to have died from the frequent handling of the wood in their craft.

Glucosides extracted from If are used to treat certain cancers but with great caution because they are very irritating.
Taxus baccata is a very toxic plant, some If seeds can kill a horse.

Common yew was venerated by the Celts. The leaves were cooked to extract a poison.
The Greek physician Dioscorides, surgeon of the armies of Nero, was even afraid of being poisoned by sleeping under his leaves.

Sowing of common yew seeds:
Sow common yew seeds in October-November in a box of potting soil and sand, if you want to sow Taxus baccata seeds in the spring, you should stratify your yew seeds before sprouting.
Germination of seeds generally begins after one to two months.