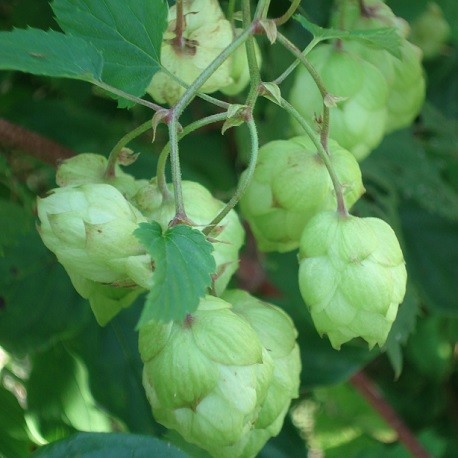 Hops or Humulus lupulus is a perennial climbing herb with a twining stem.
It is a plant that grows very quickly by wrapping around fences.
It is found in the undergrowth of European forests.
There are females and males, only females are used in medicine and for the preparation of beer.
This herb are used as a bitter and stomachic tonic in medicine.
Female hop flowers are green cones, the male flowers are small yellow filaments.
Its root system is composed of rhizomes that can be multiplied.
Hops seeds are oval gray in color, they look like those guava or toothbrush tree.

In Europe, pillows filled with dried hop cones are used to help the restless children sleep.
The cones of female flowers contain a volatile essential oil that is responsible for the powerful sedative and hypnotic properties of hops.
This herb are used to combat sleep problems in adults and children.
Two other plants have the same benefits, california poppy and wild lettuce.

The female inflorescences of Humulus lupulus, the cones, have been used to flavor beer since the 12th century.
It allowed the beer to be better stored and longer.
Previously, a mixture of hops of herbs and spices, was used to make what was then called the cervoise.

Sowing Hops seeds:
Sow the seeds in a box of fine potting soil, then cover the seeds with 1 to 2 millimeters of substrate.
Laminate seeds tray either by leaving it outdoors in the winter or artificially by leaving your tray for 2-3 weeks in the refrigerator.
Then spray water over it and let your crop grow quietly.
Germination of hop seeds usually begins after 2 to 4 weeks.
Then transplant the hop seedlings to a semi-shade spot as soon as they reach 5 cm in height.
Keep only females if it is for medicinal use or for making beer.

Also exists as a female live plant to growing.
Medicinal plant seeds to be grown in pot or directly in plain land.