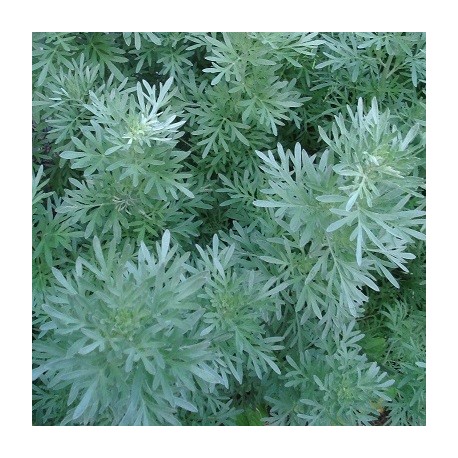 Wormwood, absinthe or Artemisia absinthium in Latin is a hardy perennial with a greenish gray stem and downy leaves of the Asteraceae family.
Artemisia absinthium can reach up to 1 meter in height and 80 cm wide.
Wormwood seeds are tiny and spread by the wind, they resemble those of genepi.

Absinthe was a popular drink in France and Europe in the 19th century.
This alcohol was banned in France then put back in the trade but without thujone.
Nowadays, we still find some in Spain and Switzerland.

Used to treat indigestion and worms, wormwood also fights fever as well as catnip or dagga and infections.
It is also sometimes prescribed as antidepressant and anti-inflammatory.
Wormwood also stimulates the brain and the digestive system.

This plant is also used as an insecticide and as a very effective mosquito. (neem and lemon grass being equally effective)

To fight against rust, let 1 kg of fresh plant be fermented in 10 L of water.
This extract can also be used by spraying the soil to repel slugs.

Sowing seeds of wormwood:
Sow the seeds in a box with a fine soil, cover them for a few millimeters with soil, pack with your hands and water with a sprayer.
It is best to laminate absinthe seeds before sprouting.
Renew watering every 3 days if it seems useful.
Seeds of Artemisia absinthium will rise between 2 and 4 weeks.
Then, as soon as the seedlings are resistant, transplant them into small pots or plant them directly in the garden.

Also exists as a live plant to cultivate.
European plant seeds to grow in the garden or in pots outdoors.