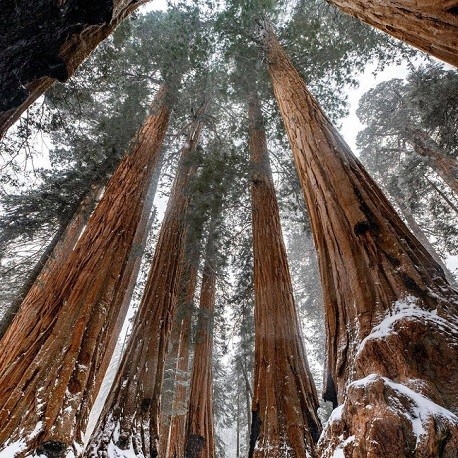 Giant sequoia or Sequoiadendron giganteum is a tree of the Cupressaceae family.
Despite what we can hear, giant sequoia is not the tallest or widest tree in the world.
On the other hand, it is the largest tree on the planet.
Its fruits are brown cones that resemble pine cones filled with elongated seeds that resemble those of Hoodia.
It is very hardy and resists very well to the negative temperatures found in Europe and therefore in France.
the bark of the redwood is tender, red-brown, fibrous in the form of a flame when young, becoming more irregular with the maturity of the tree.
Leaves are persistent and linear, it is thanks to the leaves and the bark that it is easily recognizable.
Sequoia is hard to cut, but the best time to do it remains in summer on lignified woods.
The easiest way to reproduce it is seelding from seeds.

Giant sequoia usually reaches a height of 50 to 85 m for a diameter of 6 to 8 m wide.
The most imposing specimen is General Sherman, 83 m high with a circumference of 30 m, a volume of 1400 m3 and an estimated weight of 1200 tons.
The wood of the redwood is rot-proof, it does not rot.

It is also characterized by its longevity since it can reach more than 3000 years.
It is a prehistoric tree just like the maidenhair, fossils of giant sequoia dating back 200 million years were found on Earth.

Giant sequoia is a very resistant tree that does not really fear forest fires because it is able to renew its bark over the burned parts.
The Sequoiadendron giganteum is a majestic tree that acclimates perfectly to the climate of metropolitan France.

Giant sequoia or Sequoiadendron giganteum is an ornamental tree used in the landscaping of houses on properties of large areas or large areas.

Sowing giant sequoia seeds:
It is imperative to first stratify Sequoiadendron giganteum seeds naturally by leaving them outdoors in the winter or artificially by placing the redwood seeds in moist sand and then in the refrigerator for 15 days.
Then, seeds should be buried under 4 to 5 millimeters of fine peat previously moistened and water gently.
Finally, place the crop in a place where the temperature is close to 20 ° C.
Seed germination will begin after 3 to 5 weeks.
When the young shoots of sequoia are 15 to 25 cm high, it will be possible to plant them in the garden.
if your giant sequoia is dry, it is because it has had too much water, it will then repot immediately.