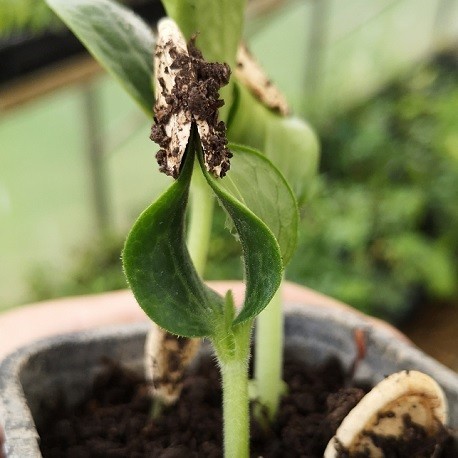 Dill's atlantic giant pumpkin is a creeping plant of the family Cucurbitaceae.
Its fruit, pumpkin also called squash has the particularity of being totally out of the ordinary.
It is the largest pumpkin variety in the world, the record is over 770 Kg.
The growth of Dill's Atlantic-giant is very vigorous.
Flowering is yellow, there are female flowers and male flowers on the same plant.
Dill's atlantic giant pumpkin seeds are large, elongated and cream-colored, resembling those of horned melon but much larger.

The giant squash is grown like all pumpkins except that it needs a lot of water to become giant.
It is advisable to remove the other fruits from the plant to keep only one.
Dill's atlantic giant pumpkin is edible.

Seedling giant pumpkin seeds Atlantic-Giant:
Start by soaking the seeds of Atlantic-Giant 12 hours in warm water, it is not mandatory but strongly recommended.
Then prepare pots of fine potting soil 15 cm in diameter and bury a giant squash seeds per pot under 0.5 cm deep and then compact well.
Water and place the greenhouse crop at 25 ° C minimum.
Dill's atlantic giant pumpkin seeds usually germinate within a few days.
Once germinated, the plant will grow extremely fast, in a few days, it will already be transplanted to the garden in a sunny place foot in the shade near a water source.

Very good germination rate.
Unusual and amazing plant seeds for sale to grow in the garden, in a very spacious place.