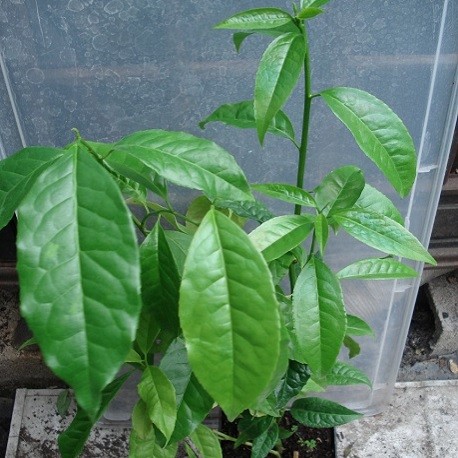 Ilex guayusa also called guayusa is a tree of the same family as Ilex.
It is native to the Amazon rainforest and is up to 6 meters tall in its original habitat.
Guayusa leaves are persistent, thick and slightly fragrant. (scent of mate leaf)
They are highly loaded with caffeine, the leaves of guayusa are dried and brewed like tea and then consumed for its very stimulating effect.

Guayusa flowers are small and white, flowering occurs around February, March.
The fruit is spherical, red and resemble those of the Ilex paraguariensis.

Guayusa plant 10 to 20 cm high, delivered in a ball.
Upon receipt of the Ilex guayusa plant, it must be planted in a pot of 20 X 20 cm with well draining horticultural compost.
It is important to properly drain the bottom of the pot before planting.
Water copiously during planting and place the guayusa in a warm, humid and partially sunny place.
Guayusa is a plant that grows quickly in good conditions.

It was a great pleasure to receive such a rare and interesting plant from your shop, the shrub was green with many stalks and a few buds, a well established plant. Keeping plant of ethnobotanical interest is one thing but spreading one of the rarest and important species available in Europe is something of great value.
Many thanks !

Hi I would like to buy a couple of living plants. Please let me know when available! Thank you ;)