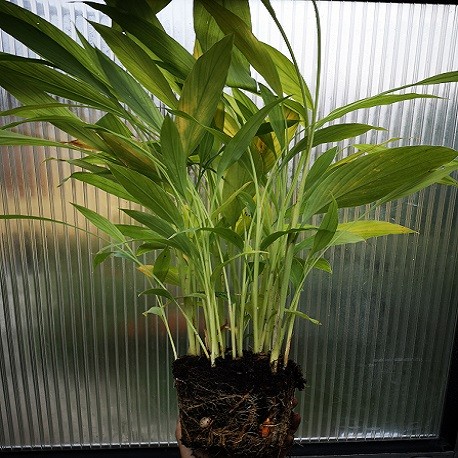 Turmeric, Indian saffron or Curcuma longa in Latin is a perennial herb of the ginger family.
He is from southern Asia.
Sometimes called saffron from India, it is widely grown in India but also to a lesser extent in China, Taiwan, Japan, Burma, Indonesia and Africa.

The dried and powdered turmeric rhizome is used as a spice and is commonly used in Indian cooking spice blends, particularly curry.
To prepare the powder, boil the rhizome, remove the skin, dry it in the sun, then reduce it to powder.

Turmeric was also widely used as an orange-yellow dye.
For the saffron costume of the sadhus or Buddhist monks for example.

Turmeric curcumin benefits is used as a traditional medicine for the treatment of skin diseases.
It has been used for a very long time as an anti-inflammatory by Indian Ayurvedic medicine.

Turmeric plant 10 to 25 cm high, delivered in a ball.
Upon receipt of the saffron plant, replant your plant in a large pot 20 x 20 cm in diameter.
Gently sprinkle your crop and then place it in a warm place at a partial shade.